Job and His Comforters

I was thinking about Job and his "comforters" recently. His friends are deeply and doubly troubled. Job, their friend, is suffering. However, if he is blameless as he claims, their sense of security, based on their understanding of a just God, may unravel. They sit silent and empathetic before their Job's suffering as he is silent, but, the minute Job opens his mouth to maintain his innocence, they throw Job under the bus. Job's account of his suffering conflicts with their understanding of a just God and challenges their faith to its core. Job's suffering becomes their crisis of faith. They feel they must choose between Job and God. Their visit becomes a debate on theology that challenges Job and denies him of any comfort they might provide him. It seems the tighter Job's friends cling to their ideologies, the less regard they have for Job.

Job's troubles start with a report that he lost his children and his wealth in a freakish series of events. Job responds:


Job 1:20-22 Then Job arose, and rent his mantle, and shaved his head, and fell down upon the ground, and worshipped, And said, Naked came I out of my mother's womb, and naked shall I return thither: the Lord gave, and the Lord hath taken away; blessed be the name of the Lord. In all this Job sinned not, nor charged God foolishly.

Soon after that, Job looses his health and his wife's support.


2:8-10  And he took him a potsherd to scrape himself withal; and he sat down among the ashes. Then said his wife unto him, Dost thou still retain thine integrity? curse God, and die. But he said unto her, Thou speakest as one of the foolish women speaketh. What? shall we receive good at the hand of God, and shall we not receive evil? In all this did not Job sin with his lips. 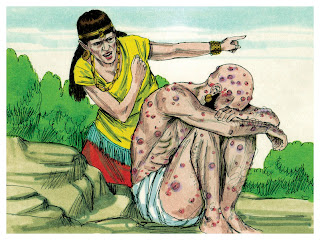 The book of Job is not a book about doctrine. It's about the mystery of the suffering of the just. For an explanation, the author describes a bet between God and the devil.


1:6-12  Now there was a day when the sons of God came to present themselves before the Lord, and Satan came also among them. And the Lord said unto Satan, Whence comest thou? Then Satan answered the Lord, and said, From going to and fro in the earth, and from walking up and down in it. And the Lord said unto Satan, Hast thou considered my servant Job, that there is none like him in the earth, a perfect and an upright man, one that feareth God, and escheweth evil? Then Satan answered the Lord, and said, Doth Job fear God for nought? Hast not thou made an hedge about him, and about his house, and about all that he hath on every side? thou hast blessed the work of his hands, and his substance is increased in the land. But put forth thine hand now, and touch all that he hath, and he will curse thee to thy face. And the Lord said unto Satan, Behold, all that he hath is in thy power; only upon himself put not forth thine hand. So Satan went forth from the presence of the Lord.

The author throws a startling explanation before our face without warning and follows that up with no explanation or justification. The point may be we're not entitled to an explanation. This story may have been as startling to the author's audience as it is to us today. This may be a literary device to illustrate that the suffering of the innocent is beyond our understanding when a bet between God and the devil serves as good an explanation as any. The suffering of the innocent remains a mystery in Job.

How do we maintain our faith when we're faced with something so apparently unjust? What is apparent, we perceive through our senses and reason through our mind. Sanity and reason demand we acknowledge what's apparent to us. Proverbs 20:12 - The hearing ear, and the seeing eye, the Lord hath made even both of them. Yet, faith demands that we humble our mind and perceptions before humanity's highest idea: and that idea is God. Faith tells us God transcends our perceptions and even the idea itself. Yet, many never get beyond God as an idea. As beautiful as that idea may be, God does not live in that temple.

Can we see beyond the idea of God and encounter God? I believe we can, however, that may only come through suffering. The best illustration I have comes through my understanding of a black hole. I really have nothing better. In the heat and density of a black hole, Newtonian physics and quantum mechanics don't apply. In a similar way, our religious dogma is insufficient to explain our experience, or comfort us, during our personal pain and suffering. It's just you and God mashed together with no space between. Those standing outside us can't see beyond the event horizon to the reality of what's happening in your life. Yet standing inside the event horizon, you see everything. 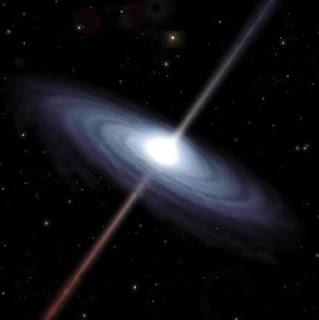 Jesus spoke of suffering. He said, "Blessed are the poor in spirit..." and "Blessed are they that mourn...." If that's true, we have a paradox. Woe to us who have not suffered and woe to us who have. However, Jesus brings a new power and dimension to the lives of the suffering. He's with us and in us through the Holy Spirit he's given us. Job had to do without this, and yet, he still showed great character and devotion in suffering.


Job 2:11-13 Now when Job's three friends heard of all this evil that was come upon him, they came every one from his own place...for they had made an appointment together to come to mourn with him and to comfort him. And when they lifted up their eyes afar off, and knew him not, they lifted up their voice, and wept; and they rent every one his mantle, and sprinkled dust upon their heads toward heaven. So they sat down with him upon the ground seven days and seven nights, and none spake a word unto him: for they saw that his grief was very great.

After that period of silence, Job has a long rant cursing the day he was born. He believes his life serves no purpose. That's when Job looses what can't be seen: his old ideologies and doctrines. Job can no longer believe that work, kindness, wisdom, prayer, and sacrifice will always shield him from adversity. The world he lives in no longer feels just and doesn't makes sense. He doesn't understand God. However, Job will continue doing those things even though they don't serve him and he will continue worshiping God though he doesn't understand him.

However, Job's friends still cling to those beliefs and Job's suffering and assertions are an affront to those beliefs. They rebuke Job and try to understand Job's suffering in a way that fits with their belief system. Job and his friends debate what neither side understands. Everyone, including Job, looses sight of what is simply God and Job with no space for argument, debate, or reason. Job's understanding of God and a just universe was shaken, but, he worshiped God in that place where that's all there is.