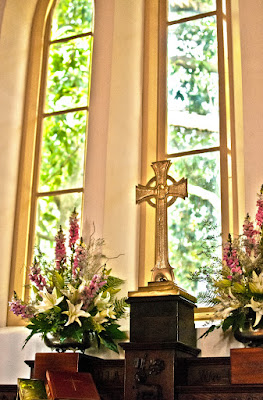 I was on the phone with my son, and just as I was about to hang up, he asked me, "How was church?" This was an interesting question because he's not sure what he believes and has only recently professed a belief in God.

"Fine," I said. "We worshiped, confessed our sins, prayed, took communion; it wasn't primarily about the sermon since the sermon is usually pretty short in the Episcopal Church."

"So just a whole lot of ritual," Sam said; more of a statement than a question.

"Ritual is just the way you do something," I replied.

"My ritual was meaningful for me this evening."

"Well, I'm glad it was meaningful for you then," Sam concluded.

After our conversation, I started thinking about ritual, so, I looked up the definition.

According to Wikipedia, "a ritual is a set of actions, performed mainly for their symbolic value. It may be prescribed by a religion or by the traditions of a community." 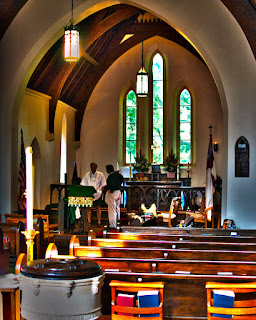 The Oxford dictionary says ritual is "a prescribed order for performing a ritual ceremony, especially one characteristic of a particular religion or Church."

I think my son meant by "a whole lot of ritual" was a meaningless thing that you don't understand, tests your energy and patience, and makes you feel like a dried up thistle bush when you're finished.

In an Episcopal Church service, there is a certain order, there are words and meaning for each thing we do, and there are symbols.

I find it comforting that the service is conducted in a somewhat predictable order. It varies depending on what season you're in but not much and the components that get moved generally stay the same. Sometimes, something gets added like the Decalogue (ten commandments) that shows up during Lent.

The words of worship, prayers, confession of sins, and communion come from the Bible. The more you read and study the Bible, the more the words in an Episcopal Church service are meaningful. The worship is participatory rather than performed. Participating makes you involved and being involved doing something you understand is meaningful and impacting. 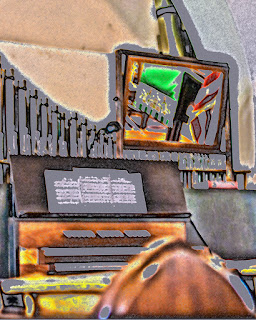 The symbols in an Episcopal Church service are symbols used in Christian Churches universally: kneeling, the cross, oil, water, bread, and wine. I understand these symbols enough so that they are meaningful to me as I participate my way through the service with my heart oriented toward God.

Taken together, the order, words, and symbols combine as I participate in worship with fellow believers to create a beautiful, meaningful, and impacting worship experience. When we're finished, I feel quiet, joy, comfort, and assurance; and, I sense Christ's presence. It's slower and quieter than other churches; but, is it less meaningful? Not for me. Understanding, faith, and sincerity are essential. Ritual is empty for those who don't believe enough to feel comfortable participating in what's going on. No one likes doing something that doesn't make sense to them.

My family went to the Methodist Church growing up. My father dozed off in Church a lot. One day, I noticed an inscription carved in the table near the alter which read, "Do this in remembrance of me." I was around ten years old at the time and I asked my father what that meant. He replied, "Someone gave that table to the church and they wanted to be remembered so they wrote that there." I bet he wouldn't have fallen asleep so often in church if he really knew what that inscription meant.

G. K. Chesterton wrote a great passage on ritual in Heretics. It's a little long for a blog, but I think it's worthwhile ending with it anyway. He wrote it in 1905 so you might not be familiar with everything he refers to, but don't worry, that doesn't interfere with the gist of what he's saying. I particularly like the last paragraph but everything before builds up to it so I had to include that too.

...humanity is divided into conscious ritualists and unconscious ritualists. The curious thing is...that it is the conscious ritualism which is comparatively simple, the unconscious ritual which is really heavy and complicated. The ritual which is comparatively rude and straightforward is the ritual which people call "ritualistic." It consists of plain things like bread and wine and fire, and men falling on their faces. But the ritual which is really complex, and many coloured, and elaborate, and needlessly formal, is the ritual which people enact without knowing it. It consists not of plain things like wine and fire, but of really peculiar, and local, and exceptional, and ingenious things—things like door-mats, and door-knockers, and electric bells, and silk hats, and white ties, and shiny cards, and confetti. The truth is that the modern man scarcely ever gets back to very old and simple things except when he is performing some religious mummery. The modern man can hardly get away from ritual except by entering a ritualistic church. In the case of these old and mystical formalities we can at least say that the ritual is not mere ritual; that the symbols employed are in most cases symbols which belong to a primary human poetry. The most ferocious opponent of the Christian ceremonials must admit that if Catholicism had not instituted the bread and wine, somebody else would most probably have done so. Any one with a poetical instinct will admit that to the ordinary human instinct bread symbolizes something which cannot very easily be symbolized otherwise; that wine, to the ordinary human instinct, symbolizes something which cannot very easily be symbolized otherwise. But white ties in the evening are ritual, and nothing else but ritual. No one would pretend that white ties in the evening are primary and poetical. Nobody would maintain that the ordinary human instinct would in any age or country tend to symbolize the idea of evening by a white necktie. Rather, the ordinary human instinct would, I imagine, tend to symbolize evening by cravats with some of the colours of the sunset, not white neckties, but tawny or crimson neckties—neckties of purple or olive, or some darkened gold. Mr. J. A. Kensit, for example, is under the impression that he is not a ritualist. But the daily life of Mr. J. A. Kensit, like that of any ordinary modern man, is, as a matter of fact, one continual and compressed catalogue of mystical mummery and flummery. To take one instance out of an inevitable hundred: I imagine that Mr. Kensit takes off his hat to a lady; and what can be more solemn and absurd, considered in the abstract, than, symbolizing the existence of the other sex by taking off a portion of your clothing and waving it in the air? This, I repeat, is not a natural and primitive symbol, like fire or food. A man might just as well have to take off his waistcoat to a lady; and if a man, by the social ritual of his civilization, had to take off his waistcoat to a lady, every chivalrous and sensible man would take off his waistcoat to a lady. In short, Mr. Kensit, and those who agree with him, may think, and quite sincerely think, that men give too much incense and ceremonial to their adoration of the other world. But nobody thinks that he can give too much incense and ceremonial to the adoration of this world.